Christopher Clark has been a member of the Conservative Party for ? years and a member of the association’s management committee since 2020.  He is also the secretary of the Oakham and District Branch.  His interest in politics goes back to his teenage years when he was active as a Young Conservative in the South Bucks Constituency.  Many years ago, he adds!  Christopher enjoys getting out and meeting people and this includes canvassing, knocking on doors and taking part political discussions.  Either with individuals or with groups.

Christopher has lived in Oakham for nearly 20 years having moved there from the Marlow area.  His son is an equestrian photographer and before his son held a driving licence Christopher would take him to the various events where he was working.  A result Christopher trained as a volunteer fence judge and dressage writer. Something that he continues to do even though his son has his own car.  For 20 years prior to retirement Christopher worked in the Learning and Development team for an international humanitarian aid organisation.  He still volunteers for them either raising money or supporting their services.  Christopher is also Chair of the local Neighbourhood Plan Steering Group and the Oakham Town Partnership.

Volunteering has always played a major part in Christopher’s life and, as well as the local organisations, he has volunteered for two hospital radios.  One in south London and the other in Reading in Berkshire.  He also volunteered for over 20 years with a well-known telephone support line where, as well as delivering the service, he chaired the management committee during the period when they were raising funds to buy their own building.

Christopher has always had an interest in railways and was a train spotter in his younger days.  The interest has stayed with him, not the train spotting though.  Over the years he has  been active in a number of railway preservation societies.  He  also has a keen interest in history.  An interest that spans the period from Alfred the Great to the present day. 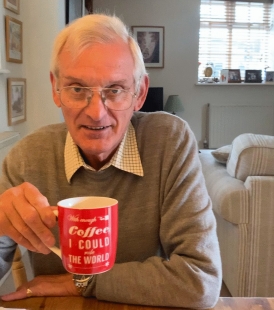