Chairman of the Association
District Councillor for Nevill ward

Loving animals, Michael riding Wizard, a home bred, one of 6 horses, 3 dogs and 6 hens kept at home. Quite a menagerie, but means holidays are few and far between.

Michael was brought up in London within an artistic/sporting single parent family, due to his father passing away at an early age. His mother’s advice was always ‘if you are going to do something, do it to the best of your ability’ you can do no more,” a maxim he has always followed, giving 100% to anything he has got involved in.

With acting, singing, art, and sporting ability within the family, Michael’s ability in singing, inherited from his Welsh mother, a coloratura soprano, showed itself at an early age, he has performed at Covent Garden and the Albert Hall and elsewhere, later in playing various sports and even later coaching, wanting to give something back. Again something he feels we should all do. He holds the highest LTA coaching qualification as a Master Club Tennis Coach, then as a challenge decided to start learning to ride at 38, qualifying as a BHSAI only a few years later. In addition he commentates and is an ITEC qualified Aromatherapy Masseur. By chance whilst coaching tennis, in 1997 he met a lady reputed to be the best racquet stringer in the world who taught him the craft, set up a specialist shop in London together and they were responsible for the majority of Wimbledon champions for over 20 years with Borg, Connors, McEnroe, Edberg, Evert, Navratilova, Graf just a few of the names, were much in demand, and were taken to the US Open and other tournaments for their skill.

He has been fundraising for many years, one cause being his village Sports Club (over £200,000) and last year organised a Ball in aid of Pancreatic Cancer in memory of his brother which raised £10,500. He converted from being a townie and moved to Medbourne some 20 years ago permanently and became passionate about the preservation of the countryside.He believes that politicians should never forget that honesty, respect and support go hand in hand. His hobbies have been mainly sporting, including tennis, badminton, table tennis, organising functions etc but he also writes poetry.

The Medbourne lunch club that Michael started 5 years ago with a friend and a grant from HDC’s Community Grant Fund to help loneliness and isolation, something he feels is more prevalent than we realise in villages

A Message from the new Chairman of the Association 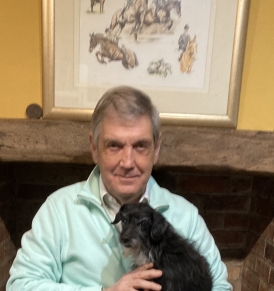