I was born and educated locally, and have represented the Gartree Division (Kibworth, Glen & parts of Billesdon Wards) since 2001, and since May 2017 I have also represented the Tugby & Keythorpe Parish. I have had a number of Cabinet and Scrutiny roles and was the Chairman of the Health Overview & Scrutiny Committee until 2021 when I was elected chairman of the county council. I am also the chairman of Kibworth Harcourt Parish Council and a member if Kibworth Beauchamp Parish Council.

Over the years, I have campaigned on various topics including chairing the CASCET campaign group to stop the Pennbury eco-town of 15,000 houses north of Great Glen back in 2009, that was supported by both Sir Alan Duncan, then MP for Rutland & Melton, Sir Edward Garnier QC, then MP for Harborough and Sir Peter Soulsby, now Mayor of Leicester City but then MP for Leicester South. I have been lobbying for an A6 relief road to bypass the Kibworths, and have the support of the present MP Neil O’Brien OBE, who has lobbied the Department for Transport ministers to re-trunk the A6, which could release Major Road Network money without the necessity of housing developer funding and an unpopular strategic development north of Kibworth Harcourt.

I am involved in many other divisional activities and am always happy to discuss constituent problems. 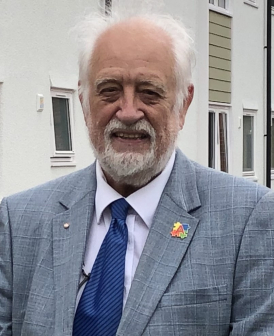